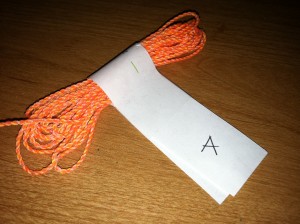 Recently I had the opportunity to get my hands on some strings by a new company called Twisted Stringz, ran by Jen Jenn. She sent me a package of five different types of yo-yo strings, type A through type e and simply said ‘Enjoy!’ (or she wrote it on the back they all came in 🙂 ). It’s been a while since I have used anything but your standard Duncan Cotton string, I use to buy it in bulk and never really needed anything else. But when my stock started running thin I decided to test out some of the new companies that were making string by hand and wanted to try Twisted Stringz first.

The first of their strings that I’ll be review is their Type A string. It’s designed and made specifically for performing whips and suicides and it delivers on what it promises to do quite well.

Out of the Package

The first thing I noticed as I pulled a string out from it’s bundle was how rigged and tough the string felt in my fingers. It was probably half as thin as the cotton string I had been using and four times at rigged. It was obvious to me that this string was meant to be broken in. The string came extra long and was tied off with a knot at the end. This is done so that you can tie your loop and size the string to your height as needed. This is a refreshing change to how the mass produced string goes about things (basically you fit their mold and you get over it). I tied off the loop, snipped the excess string, slipped it onto my Beast and wound it up.

This string is insanely tough, from the breakaway to the trapeze I felt it bite into my finger. I’ll be honest, my hands are use to being babied by cotton string, so switching it up to one made entirely of Polyester and Nylon is a shock to say the least. I shrugged off the shock and did a little ‘skin the gerbil’ combo. The string wasn’t bad, definitely needed to be broken in. I threw a suicide catch, the loop was WIDE. I wish it was a little more visible in the video. The rigidity of the string held the loop open quite well as it was passing through the air. Twisted Stringz facebook page makes a joke about how ” If you can’t do either or those tricks, chances are you can’t walk & chew gum at the same time!” They aren’t kidding.

The moment of truth came, it was time to give a laceration a try, it something that I’m known for doing excessively in my videos so I was interested in seeing how this string could make it easier on me. The string sliced through the air. You could hear it whistle as I whipped it around the yo-yo three times to land it into a hidimasa hook. The string was going so fast it hit the bearing and bounced back out of the yo-yo. I tried it one more time, the string wrapped around my finger, around the yo-yo, back around my finger, and stopped in the gap of the yo-yo again. I had double-on’ed a hidimasa hook. Insane. You can see what I’m talking about more in the video.

This stuff does exactly what it is advertised to do. It does laceration and suicides like a champ. It plays hard though. My hands have lines all over them from getting burned by the string. If you are trying to learn how to do lacerations and suicides this stuff is definitely for you. As I said it tears through the air and doesn’t mess around when you are whipping the string for a laceration and it holds an amazing loop when you are going for that suicide catch. My only issue with it is that it is so tough that extended use of it in normal play burns your fingers. As I understand it this is the longest lasting string from Twisted Stringz, as you break it in the toughness should go away but I haven’t had enough time to break it in myself, I had to move on to the next string.

All in all I would rate this string as an 8 out of 10. This is based off my gut instinct and how it played compared to string I’m used to and based of what the manufacturer said it could do. If you’re interested in learning more about Twisted Stringz swing by their facebook page here: http://www.facebook.com/twistedstringz.

in which I talk about my normal day then about my how to yo-yo course.

in which I talk about who move my cheese, A very powerful message and a very easy read. get it here: http://amzn.to/wr2bGP

Knowing what to buy and where to start in yo-yoing can be a bit confusing. A lot of people starting out feel that the more the product costs the better it will be for them. This doesn’t typically work out for someone who is starting out. Expensive yo-yo’s are generally made for experienced players who know how to use them and how to make them return to their hands. Without the experience gained from use of more basic models these expensive yo-yo’s will cause only confusion and frustration.

It is important to note here that it will save the beginner trouble in the long run to start them on a fixed axle yo-yo and then graduate them to a transaxle yo-yo. The reason for this is that fixed axle yo-yo’s teach the beginner how to throw their yo-yo smoothly enough to keep it from bouncing at the end of the string – allowing it to sleep – but hard enough to get a long sleep time out of it – allowing them to perform tricks. Fixed axle yo-yo’s will also help to teach a beginner yo-yoer to throw the yo-yo straight, without tilting, allowing it to spin longer because the string wont be touching the inside wall of the yo-yo.

If you are just starting out and don’t know what yo-yo to start with I can make a few suggestions for you. I have a few yo-yo’s that I’ve learned on and taught people with that I have found to be amazing learning and teaching aids.

Note: This article will receive updates as time goes on and better beginner yo-yo’s become available. Also, if you click the links to the yo-yo’s and buy something I get paid like 30 cents or so and I’ll use it to buy coffee, Thanks for your support 😉

in this video I talk about conquering some of my self doubt.